In the latest example of a wicked hot housing market, a 10-foot wide house in Boston has sold for $1.25 million.

Located in the city's historic North End neighborhood, the 2-bedroom 1-bath home was built in 1890, according to city tax records, though some accounts say 1862.

The house is a frequent tourist spot, seen along the Freedom Trail in Boston.

"Our first day for marketing the property there was about 50 to 75 people just photographing the house, just part of their walking tour," says Travis Sachs, the real estate agent who sold the house. "Pretty amazing part of Boston, just to see it and say, 'Wow look at this house I can't believe somebody lives there.' "

Mary McGee, who lives across the street and has been in the North End for over 40 years, tells Morning Edition that locals know the house as the "Narrow House" or more commonly as "The Spite House."

The legend is that two brothers inherited the land some time around the Civil War. One of them went away to fight and came home to find that the other brother had built a house bigger than his share of the land.

So the returning soldier built a skinny house in the only space left.

"That other brother, to spite him, built the house there to block off entry" to the bigger house, McGee says.

Sachs says they had a handful of offers. They sold to a local family of four who offered more than the $1.2 million list price. 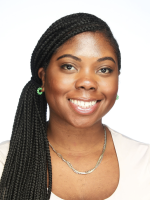 Jamila Huxtable
Jamila Huxtable is an assistant producer for NPR's daily economics podcast, The Indicator from Planet Money.
On The Air